I purchased this car for my grandaughter and i am so glad that i did. Its Pink and beautiful she loves it. The remote control works a treat which is just as well as she cant reach the pedal yet. Great service frkm purchase to delivery in less than a week. Well happy.

We paid to upgrade to leather seats. Very happy with them.

We did have an issue with the car arriving damaged...it wasn't the courier as the box didn't have a mark on it. After a few emails back and forth we now have it resolved. They have given us a partial refund to get the repairs done by a bodywork specialist and sent us a couple of gifts as an apology.

I am extremely happy with the product and the service. I would definitely recommend them.

I order the Urus as well as XT3 Monster Truck as Christmas present for my children. I paid for the assembly service for both cars and ordered covers for both of them.
Unfortunately when I unpacked the Urus from the bubble wrap on Christmas Eve I noticed that the steering wheel had snapped off. Not great the night before Christmas but these things can happen. I took a picture and sent it to the company straight away to show the damage.
The monster truck was fine and the children used it in Christmas Day however the next day something had gone wrong with the electrics and it would just keep moving backwards and forwards of its own accord. I sent a video of this happening to the company.
After some backwards and forwards I was able to send the cars back. The response I got was that I must have damaged the Urus via use (even though I had sent an picture of it damaged on Christmas Eve) and that the monster truck was in fully working order. I’m not sure why I would send back a truck that was working and also how they can explain the video of it operating of its own accord.
After numerous emails they eventually agreed to a partial refund (which excludes the £180 I paid for the assembly service as that is non-refundable).
The whole customer experience has been terrible and a huge waste of money. Some of the worst customer service I have ever experienced.
I would strongly encourage people to purchase their electric cars from another provider.

arrived the next day
bought for my Grandson
my son had no trouble putting it togather
I would recomnend this. 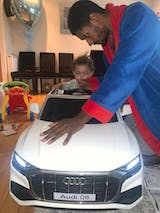 The softer wheels are good as hey do not sound as loud as hard plastic ones would on hard surfaces. They are not rubber but you can push your finger nail into them. More like a plastic foam. The leather like seat has some cushioning in it so a bit gentler on young bums and backs.

Delivery was fantastic.
Assembling it was quite easy, using an online video, the instructions that came with it were not very helpful.
Our 2 year old loves it and sits in it alongside his 6 year old sister.
The only problem we’ve found is that the front wheels turn in which makes a terrible noise when it’s moving. 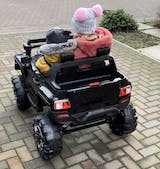 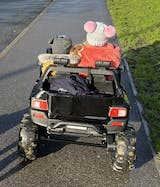 Bought the car for my grandchildren and they love it 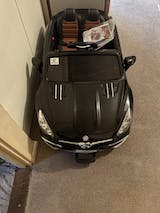 A
Upgrade to Padded Leather Style Seat Ademar F. (Poplar, GB)
The quality can be better

The charger plug broke in the second use 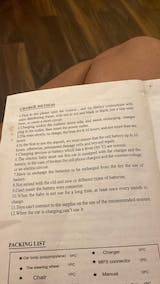 I paid £260 for the Mercedes’ G Wagon along with extra money for a personalised number plate it has been 4 days I have still not received it. Despite emailing the company still not received any response. My daughters birthday is on Saturday and I’m so annoyed this car with the PERSONALISED NUMBER PLATE was supposed to be her entrance for her party but now I’m guessing it’s not going to happen! Also seat was hanging off despite paying extra for a leather seat. Very bad quality will not be ordering again!

Product is great, easy to assemble, instructions for remote control not straight forward, takes a bit of getting used to. If required for special occasion get your order in very early as we eventually got delivery on the day but it was close. No telephone support and lack of speedy e-mail communication made experience stressful.

We pre-ordered the Maserati GranTurismo (after doing lots of research and comparing cars) for my son's second birthday present at Christmas. The car was originally due to be dispatched the last week in November, however was sadly delayed. The company (Ashley and Amber in particular) were really helpful with all communication and kept me up to date throughout.
The car arrived earlier this week. I was able to assemble it by myself by following the instructions included with relative ease, and charged it up as instructed. The attention to detail achieved with the licencing is amazing - The brand name in the headlights, the logo in the grill and alloys. We opted to upgrade the seat and wheels, and they definitely do complete the look. I also purchased the rain cover and extended battery warranty. We were also sent cute personalised number plates, although in all the excitement in testing the car forgot to put them on, so will be adding those tomorrow.

My son absolutely loves the car. Even whilst it was charging and not operational he had fun climbing in and out and just marvelling at it. When he figured out it moved the next day after being charged his mind was blown! We went outdoors with it the first time this morning and he had the best time... Looks like we will be spending lots of time outdoors moving forward! He's even learnt to say Maserati within days of having it. The car is very spacious and can see him growing into it in the coming years!

Would definitely recommend RiiRoo, and would absolutely shop with them again in the future. 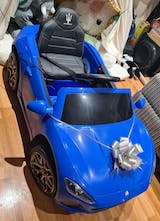 Great little car, my son absolutely loves it. It runs fine on carpet and easy to control with the parent remote.

My 2 year old granddaughter loved it as you can see from the video. Arrived day after ordering - no problems assembling. Her 5 year old sister also loves driving it ❤️

Received the focus rs as 1 came into stock Received already built which was odd, on closer inspection it had scuff marks and had been glued underneath still waiting for a email 2 days later from riiroo. I picked riiroo over ebay becuase I thought they was trusted 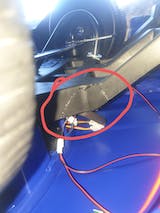 Waste of £10 as they are not soft at all and are hard plastic still , the car is good quality but let down by the misdescription of the wheels and poor customer services attitude towards it

What an amazing gift perfect for my little girl she absolutely loves it even when the battery is charging she has to be sitting in it thank you so much riiroo, and the delivery was amazing